At 4:16pm last Wednesday I got a short and to-the-point email from Nilay Patel at The Verge with only a link that started with the host “googlereader.blogspot.com”. The sudden spike in NewsBlur’s visitors immediately confirmed — Google was shutting down Reader. 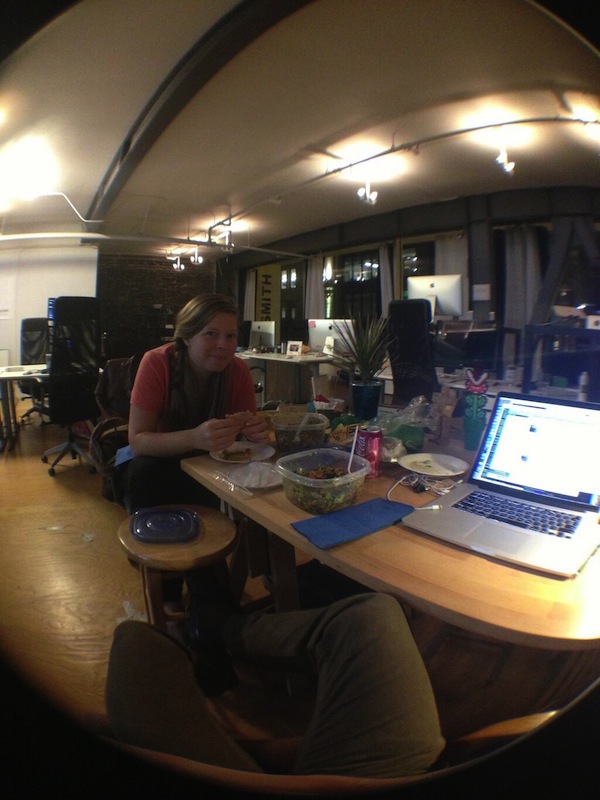 Late night at the office

I had been preparing for a black swan event like this for the last four years since I began NewsBlur. With the deprecation of their social features a year ago I knew it was only a matter of time before Google stopped supporting Reader entirely. I did not expect it to come this soon.

As the Storify history of the Reader-o-calypse, NewsBlur suffered a number of hurdles with the onslaught of new subscribers.

A few of my challenges and solutions

I was able to handle the 1,500 users who were using the service everyday, but when 50,000 users hit an uncachable and resource intensive backend, unless you’ve done your homework and load tested the living crap out of your entire stack, there’s going to be trouble brewing. Here’s just a few of the immediate challenges I faced over the past four days:

Paypal’s fraud department just called, asked me what’s going on. Asked the rep from Omaha if she’s heard of Reader, and then a big Ohhh. 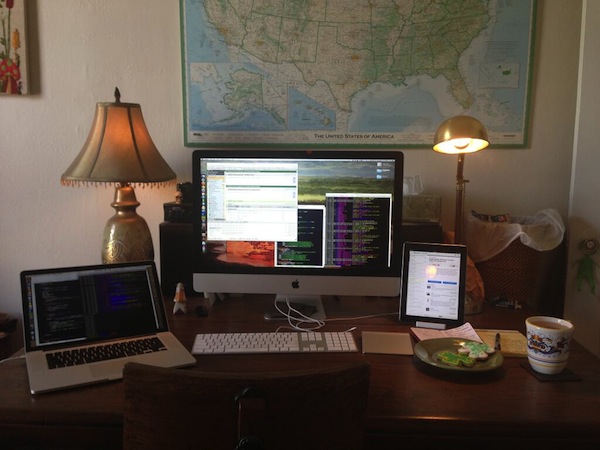 The sad extent of my St. Patrick’s Day

As a one-man-shop it has been humbling to receive the benefit of the doubt from many who have withheld their judgment despite the admittedly slow loadtimes and downtime NewsBlur experienced. Having the support of the amazing NewsBlur community is more than a guy could ask for. The tweets of encouragement, voting NewsBlur up on replacereader.com (If you haven’t yet, please tweet a vote for “#newsblur to #replacereader”), and the many positive comments and blog posts from people who have tried NewsBlur is great.

It has also been a dream come true to receive accolades from the many who are trying NewsBlur for the first time and loving it. Since the announcement, NewsBlur has welcomed 5,000 new premium subscribers and 60,000 new users (from 50,000 users originally).

The next three months

Over the next three months I’ll be working on:

For those of you who are still trying to decide where to go now that you’re a Reader refugee let me tell you a few of the unique things NewsBlur has to offer: 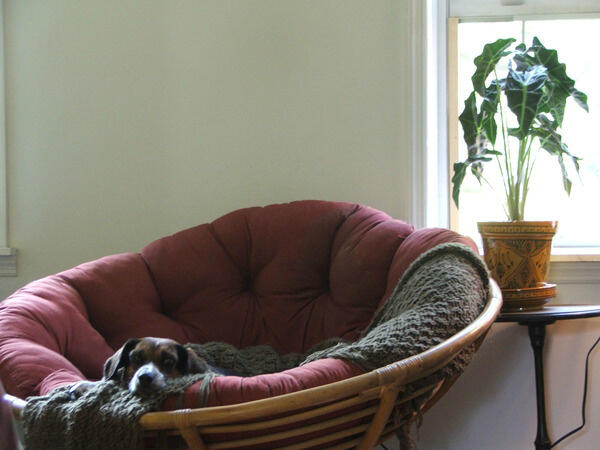 Shiloh during better times. Your premium subscription goes to both server costs and feeding her

With NewsBlur’s native iOS app and Android app, you can read your news and share it with your friends anywhere. And with the coming improvements over the next three months, you bet NewsBlur will be the #1 choice for Google Reader refugees.

Join NewsBlur for $24/year and discover what RSS should have been.

ksw
reply
Excellent write-up. I'm growing more confident about my decision to use NewsBlur in place of Reader.
Manhattan

shanel
This is what brought me here.

heliostatic
reply
Best news reader around, and the best team building it. Plus, you always know what features are coming next if you check the various branches on github.
Williamstown, MA

denubis
reply
Well done newsblur. Been using it for a year and I've quite happily resubscribed at double my previous fee (by choice.)

keri
reply
might not be for everyone, but it's for me
chapel thrill, nc

BLueSS
reply
I love NewsBlur, and this was a nice read.

RainofTerra
reply
Post Mortem on Readerpocalypse glitches from Newsblur which I switched to from Google Reader a while back. Great service.
San Francisco

TheRomit
reply
I hope that doesn't mean those API end points requested by the W8 developer are going to take a back seat :-(
santa clara, CA

CliffS
reply
Thanks for the update Samuel! This is why I prefer to support smaller operations--my input actually counts for something.
Wahiawa, Hawaii

mithrandir
reply
I'm super excited to see NewsBlur take off like this. Congrats!

Kinda wished I had found NewsBlur before becoming a Reader refugee. Great work and hang in there - all of the hard work will pay off!
Chicago or thereabouts

Great read on scaling exploding web apps. Been there, done that.
Portland, OR

Love the run down and appreciate the time it took to update us.
Chico, CA

samuel
Ok, I'm going to admit it right now. My girlfriend wrote a good chunk of the post as a template, which I then rewrote with specifics. Seriously, she's the absolute best.

jbloom
Hire your girlfriend to do PR. She is awesome! :D

jbloom
Going to get my dad a premium account.

been very impressed with the service and the ramp up. only took a few days and things are running pretty smooth. Glad i made the move here

Congrats, Sam, and keep up the amazing work!
Duluth, MN

all hail Samuel Clay! Great work. I reached out in case I could help in devops, but I didn't know the extent of your personal inbox disaster.
Uranus

samuel
Don't know if you noticed, but I accidentally sent myself 250,000 error emails, so yeah, my inbox is currently jammed.

"Paypal’s fraud department just called, asked me what’s going on. Asked the rep from Omaha if she’s heard of Reader, and then a big Ohhh."
San Francisco, CA

pyrona
Heeeey, when you share something you should always comment something so we can reply to you! Newsblur has a, uh, "feature" that makes it so others can't comment on your shares unless you do first. (I'm only telling you this here, because it's the most recent thing you shared that you commented on ^_^)

blueminder
Ah, I didn't know that's how it works on this end of the RSS world. http://sighroll.com/wp-content/uploads/2012/10/themoreyouknow.jpg

SuzeVich
BTW: You TOTALLY got me with Shiloh ... I would have paid even if you hadn't stopped the free subscriptions. ;D

Any chance those shirts make a comeback? I'd buy some NB swag.
Madison, Wi

kyleniemeyer
reply
Hey, I'm in this post! Perhaps not my most flattering picture...
Corvallis, OR

kyleniemeyer
Also, I think that NewsBlur has pretty much recovered from the Great Reader Exodus.

samuel
Nope, not even close to recovered. While the servers are stable, the load times are now 9X where they should be. I have charted some remedies, but they're going to take time. And I still have yet to go 24 hours without a server meltdown.

kyleniemeyer
Yeah, I did notice the outage this morning. At least, things seemed better today than they had all last week.

jbloom
Samuel, at least I am able to use my iPad now. And I am glad to see from all of this that you know your stuff with databases and such. You know WAY more than I do! :D

This guy is awesome. Premium is basically confirmed for me...might do it Monday
Charlotte, NC, USA

gazuga
Epic post from a prescient fellow. It's plain you've been mulling over the question of free users, with good cause. For my counterpoint to Maciej Ceglowski, see "Transitioning back to freemium" in the ideas section of the support forums.

gazuga
Loving my t-shirt, by the way!

ChrisHamby
Thanks for all your hard work! I didn't send in a photo of my tshirt because it's a few sizes too big... but that's the last thing I'd want you to worry about now!

sashae
thanks for working so hard to keep all of us poor news junkies happy... you've built a really great thing!

InKunKa
I'm thrilled with Newsblur, and happy to be a new paying member. I wish I had known about it before :)

mocker
Keep up with the transparency of what's going on with any site issues. As someone who already went premium, I appreciate it.

sredfern
Your dog may gain some weight with all those premium subscribers...

trekkie
Wore my shirt all day but forgot to take a picture.
You won me over, I completely ditched google reader and deleted all of the data over there. I need some confirmation on if the price will go back to $12 and when exactly it will do this, I understand why you did it but I was there when it changed and that obviously made me do a double take. I NEED the features of the premium account so please let me know if I should wait or if the price will never go back down.

mfitzhugh
You're doing a great job, Samuel. When I checked out Newsblur last week, your dedication to building a great service was evident from the get-go. It made signing up for premium an easy choice. Keep up the good work, and don't worry about breaking a few things along the way.

PunkRockWarlord
I joined a few days ago and have been very impressed. I'd been wanting an RSS client that would sync between my laptop and iOS devices (and wasn't tied to Google), and NewsBlur delivers on all fronts. Thanks for putting in all the work, Samuel!

PaulPritchard
Speaking as a Reader refugee, I have been very impressed with NewsBlur so far - so much so that I am starting to wish that Google had shut down Reader sooner. In many ways, NewsBlur strikes me as being everything that Reader could have been.

kworr
Maybe you need some help? I have some skills on nginx/freebsd/pgsql and making sites go stable on the high load (not just extremely high, like 2kk request per day).

raorn
You did a great job, Samuel! dev.newsblur.com is something I always wanted. Already fell in love with "intelligent training" feature.

sylvaingaffie
Man, you are AWESOME !! I still wonder how I would react in your case. I probably would have sank into madess :o).

stavrosg
I live in Europe, so I woke up one morning with NewsBlur already in meltdown mode, and found about Reader a while later, so I just decided to sit out the mayhem and return to my feeds a couple of days later. You handled the situation as best as you could, congratulations and be assured that my premium subscription will be renewed once it ends. I am also glad that I quit Reader away ahead of the announcement of its shutdown and found this service.

nebkor
As someone said on HackerNews, your first hire should be a good sysadmin; making changes to ulimits is easy and easy to make stick :)

Interesting post about the the aftermath of the Google Reader announcement on the awesome NewsBlur service!

What one person has built is impressive. Success disasters are always better to deal with than normal disasters.
Seattle

ocrammarco
Agreed, as a developer I have nothing but admiration and sympathy.

katiegirl
This is exactly why I have given this guy my $24. He seems pretty up and up.